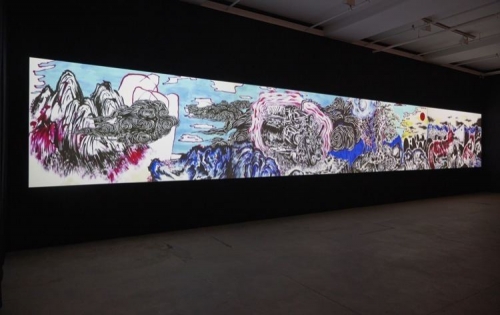 This #FilmFridays feature is Sun Xun’s film, Time Vivarium, 2015. The film will be live for 24 hours from Friday, April 24 until Saturday, April 25.

Join us on social media and tag @SeanKellyNY and #TimeVivarium to share a pic of your at-home screening. The person who submits the best picture of them watching the film will receive a signed copy of Sun Xun’s catalogue.

#TimeVivarium was created during Sun Xun’s two-part solo exhibition of the same name at the gallery December 2014-January 2015. The concept for this film and exhibition grew out of Sun Xun’s preoccupation with global history, culture and politics. For the first part of the exhibition, the artist and his assistants were in residence at the gallery creating work — murals, drawings and paintings – based upon his father’s recollections of living through China’s Cultural Revolution; his own experiences as a modern Chinese citize; and his interactions with visitors to the gallery throughout the month of December. The works Sun Xun made whilst in the gallery were combined with thousands of images produced in the six months prior, and then filmed sequentially — culminating in an expressionistic, stop-motion animated film, pulsating with creative energy. Following a complete reinstallation of the gallery, transforming it into a theater space, the film was shown through four synchronized projectors, transforming the space into an extraordinary sensorium of color, light, music and sound.

Sun Xun’s work addresses these ideas in a symbolic and surrealist way, often choosing to use animals and insects as the main characters of the story rather than human characters. He is especially interested in the ways historical events are perceived and remembered by ordinary citizens versus how they are officially presented by public agencies and the media.

Link here will be live for 24 hours from Friday, April 24 until Saturday, April 25
Back To Top