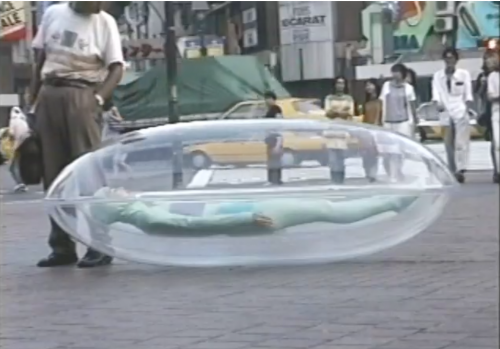 Today’s #FilmFridays feature is Mariko Mori’s film Link from 1995–2000. Click the URL below to watch on Vimeo for 24 hours from Friday, July 31 until Saturday, August 1.

Mariko Mori’s film, Link is a 4-channel video installation. Each of the four videos projects images of Mori lying inert in her transparent Plexiglas “body capsule” against iconic vistas of thirteen different sites that represent three periods of human time: antiquity (the Giza pyramids), the present (Tokyo’s Shibuya), and the future (the advanced megacity of Shanghai).

Mori presents the viewer with a sense of time that defies linearity, giving form to the Buddhist concept of transmigration, wherein life and death are in constant states of mutual generation. The culmination of an important series of Mori’s performance and photographic works that center on the body capsule performances, Link illustrates the major themes that have occupied the artist since her emergence in the early 1990s: the idea of the cyborg, the reinvention of ancient systems of spiritual knowledge for contemporary consumption, and the creation of an architecture of contemplative space.