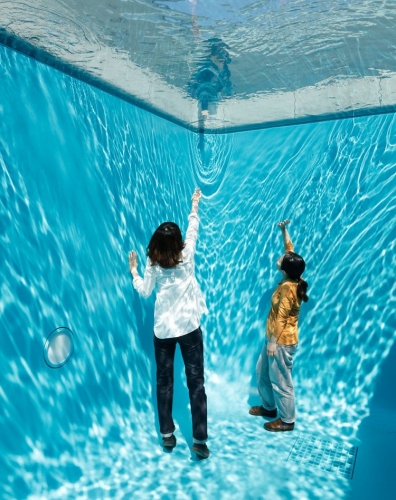 More than any artist working today, Leandro Erlich (1973, Buenos Aires) has created a body of sculpture and large installations over the past two decades in which the architectural appearance of the everyday functions as a type of perceptual trap, leading he unsuspecting viewer into a visual paradox that systematically defies what should be the rules and order of the material world. In Erlich’s parallel universe, stairs lead nowhere, elevators don’t stop at a destination, passive spectators become active participants, clouds take on physical characteristics, and the solidity of built space turns out to be a fleeting optical illusion.

In July 2019, MALBA will present the first monographic survey exhibition of Erlich’s work in Argentina, using the title LIMINAL. Selected and arranged by New York-based guest curator Dan Cameron, the exhibition will present thirteen works that span more than two decades of Erlich’s production. Arranged throughout MALBA's top and lower floors, the survey has been designed in such a way as to suggest an underlying narrative story-line, leading viewers through a series of encounters that act cumulatively to introduce a degree of doubt about the reliability of their own sensorial input.

The title of the exhibition references a zone that exists at the threshold of another space, and indirectly references a position of being on the verge of crossing over, or entering into, a specific destination or state of existence, but without ever fully getting there. To hover at the liminal edge of an experience suggests that one is perpetually caught between a prior reality that has been left behind, and a new reality beckoning at close range, but leaving us stranded if we were to linger. Upending Ram Dass’s famous dictum of heightened consciousness, ‘Be here now,’ Erlich’s work suggests that, despite our collective conviction that we know how to locate our physical and mental selves within the framework of the larger world, the truth is that most of us are engaged in an extended guessing game, in which situations that can only logically be real within our dreams instead cast a spell of enchantment over our waking lives. The accumulated impact of experiencing multiple Erlich works within a single exhibition setting is that it leaves us with an intensified awareness of this inherent duality, wondering under what circumstances we can ever confidently assert that we are ever truly here or there.

The impact of Erlich’s art on his viewers requires a believable simulation of everyday life, and to that end the sequence of works on view carries explicit connotations of quotidian existence: clouds, the subway, a classroom, the sidewalk, a pool, a beauty parlor, one’s neighbors, doors, a vase of flowers. Despite appearances, however, each work contains underpinnings of the uncanny, in which the viewer experiences a mild shock, because something that cannot possibly be real is nonetheless revealed as just as ordinary and matter-of-fact as the predictable phenomenon one was anticipating.