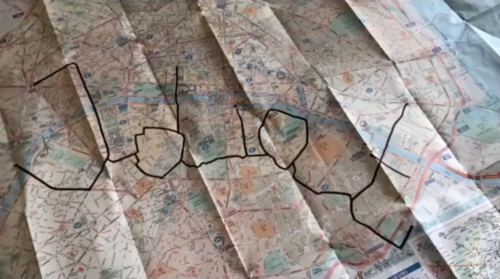 Kris Martin has been asking friends and neighbors to share old road maps that he is using to travel “mentally,” while staying close to home and working in his studio in Wannegem-Lede, Belgium.

In this #IntheStudio film, Martin references one of his important early works, The Idiot, created in 2005. To produce that work, he transcribed in his own hand the entire text of Dostoevsky’s 1,494 page novel of the same name, replacing the lead protagonist’s name with his own.

#KrisMartin is internationally recognized for a rigorous conceptual practice in which he addresses existential questions with subtlety and wit. Martin’s sculptures, drawings, photographs and installations reflect his ongoing preoccupation with matters of human existence and its contradictions. In his work, Martin often makes use of the readymade—through subtle acts of displacement and with minimal intervention, he re-contextualizes familiar objects, infusing them with new meaning.