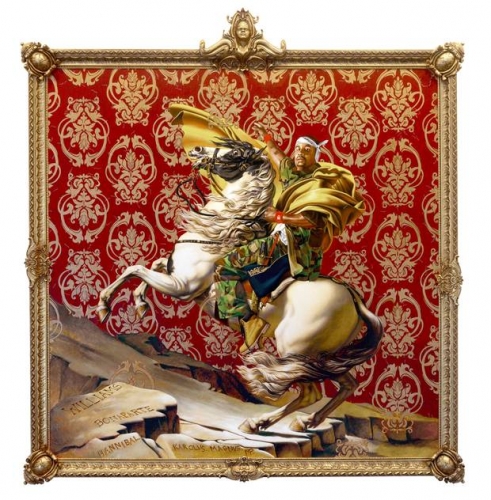 Iconic painting of Jacques-Louis David and masterpiece of the castle of Malmaison, The First Consul crossing the Alps was commissioned in 1800 in the name of the King of Spain, who hoped to attract the good graces of young General Bonaparte . The idea of ​​being represented "calm on a fiery horse" would emanate from Napoleon himself, proud to put his steps in those of Hannibal and Charlemagne. The power of the composition proposed by the artist encouraged him to paint four replicas, today in Berlin, Vienna and Versailles (two copies). The First Consul crossing the Alps has caused many copies and misappropriations, but none seems as full of meaning as the great version painted in 2005 by Kehinde Wiley. Wiley deliberately questions the great tradition of the historical portrait, designed to express and reinforce the social status and power of the model. His paintings showcase African-American models who, like the artist himself, are confronted with their exclusion from some of the stories in the history of European art and history. With Napoleon Leading the Army over the Alps, the artist, while retaining the horse and part of the original painting, replaces Bonaparte by an unnamed African-American wearing a lattice and Timberland.

Gathered for the first time, the two paintings will dialogue at Malmaison Castle and then at the Brooklyn Museum. This presentation will be accompanied, on each site, a rich cultural programming emphasizing both the permanence of the codes of representation of power and the importance of the historical contexts of each of the two works. It will also highlight the role of staging inherent in any portrait, a problem particularly current at the time of the multiplication of images, social networks and staging of oneself.