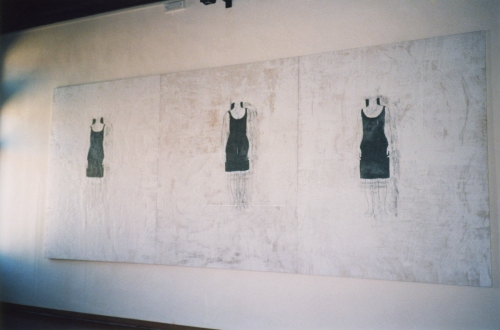 Today we look back to the XLVII Venice Biennale in 1997 curated by Germano Celant, in which Julião Sarmento represented Portugal at the Portuguese Pavilion, curated by Alexandre Melo.

#JuliãoSarmento’s paintings for the Portuguese Pavilion were thematically related to the legend of Casanova, the Venetian libertine. In the triptych, Suffering, Despair and Ascent, a headless female torso in a black dress appears on each of the three canvases, almost like a fragmented film still. The viewer is challenged to determine whether it is the same woman from canvas to canvas and must attempt to construct a narrative. Together the images suggest an event that has taken place, or is about to, but the precise moment cannot be grasped or decoded. Sarmento is well-known for his thickly impastoed, textured paintings where the paint field forms a ground from which he teases out his imagery in graphite, reversing the traditional basis of painting. His imagery is often partially or fully erased. He then draws on top of the erasure, creating fragmented and layered forms, which evoke mysterious gestures and relationships.

Following the Venice Biennale, Sean Kelly Gallery published Julião Sarmento: Casanova, the catalog reproduced in color each of the twenty one paintings that were exhibited in the #PortuguesePavilion at the #VeniceBiennale and features text by the late Michael Tarantino.