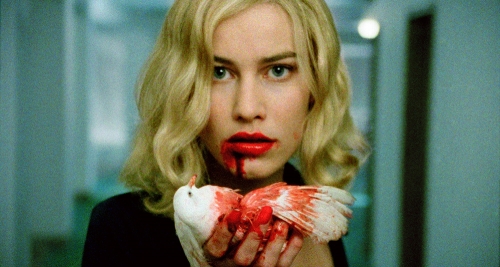 This #FilmFridays feature is Johan Grimonprez’s film, Looking for Alfred, 2005. The film will be live for 24 hours from Friday, May 1 until Saturday, May 2. Link below.

Join us on social media and tag @SeanKellyNY and #LookingforAlfred to share a pic of your at-home screening. The person who submits the best picture of them watching the film will receive a signed copy of #JohanGrimonprez’s publication.

Looking for Alfred, plays with the theme of the double through simulations and reversals. The point of departure for this film is famed director Alfred Hitchcock and his legendary guest appearances in his own films. Grimonprez weaves an unexpected narrative from Hitch’s fifty-year trail of cameo appearances in his own films, featuring innumerable Hitchcock doppelgangers acting out a mysterious game of confusion in which Hitchcock meets Hitchcock. Playing out a multi-leveled ‘reality,’ Grimonprez’s cinematic twists and turns echo the trademark of the Master of Suspense, while radiating a quiet and beguiling surrealism reminiscent of another great artist, Rene Magritte. Looking for Alfred won the International Media Award (ZKM, Germany) in 2005 as well as the European Media Award in 2006.

Belgian artist and film-maker Johan Grimonprez is internationally renowned for his complex film and video montages which combine footage from various sources to explore the troubled relationships between modern, media-dominated world cultures and their complex social, cultural, historical and political identities. His critically acclaimed work combines the practice and theory of art and cinema, documentary and fiction, and often demand that the viewer do a double take to consider their complexity. Informed by an archeology of present-day media, his work seeks out the tension between the intimate and the larger picture of globalization.