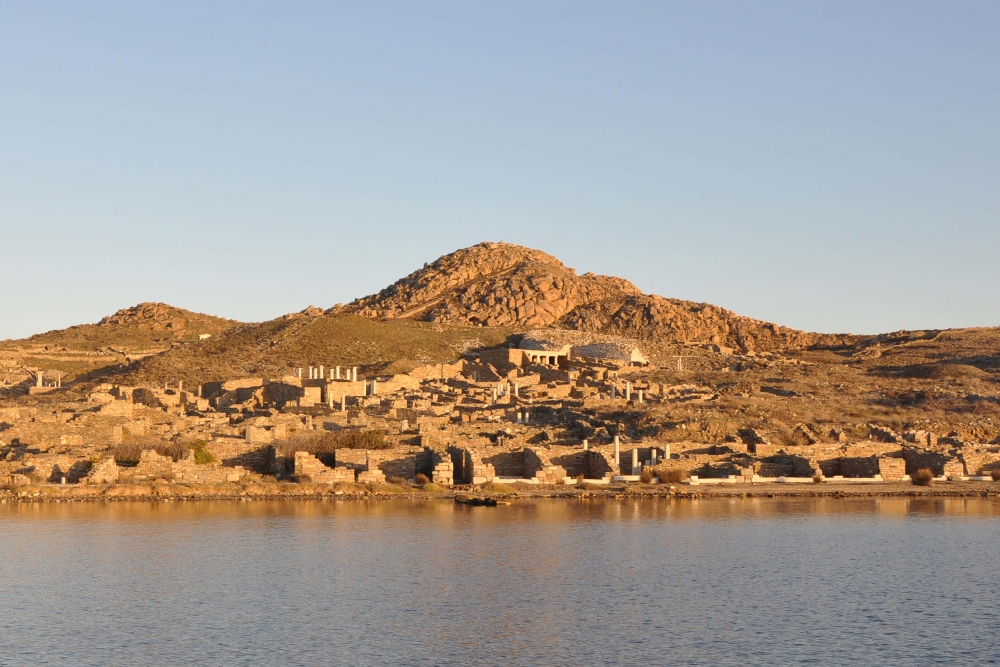 NEON, in collaboration with the Ephorate of Antiquities of Cyclades, is proud to present SIGHT, an unprecedented site-specific exhibition by renowned British sculptor Antony Gormley, on the Greek archaeological island of Delos and its Museum.

This is the first time, since the island was inhabited over 5,000 years ago, that the Greek Archaeological Council has unanimously approved a contemporary art installation to take over the mythological and archaeological site. SIGHT is specially conceived to resonate with the statuary, temples, squares, vistas and the topography of the island of Delos.

The island of Delos, a granite rock no more than 5km long and 1.5km wide in the middle of the Cycladic complex of islands in the Aegean, has a past filled with myths, rituals, religions, politics, multiculturalism and trade. Delos’s intertwined and contrasting natures, as both holy place and commercial town, combined with its topography and geographical location, made the island a singular and cosmopolitan Hellenistic town.

Mythology tells us that the island’s first name was «Άδηλος» (A-Delos), meaning ‘the non-visible’ – a floating rock with no fixed location. It became «Δήλος» (Delos), ‘the visible’, when Zeus arranged for Leto, his mortal lover, to find refuge there, safe from the wrath of his wife, the goddess Hera. When Leto gave birth to twins Apollo, god of light, and Artemis, goddess of the hunt, the island’s destiny and future prosperity was assured. This unique character was marked on Delos’s architecture, sanctuaries, houses and through rituals to celebrate the gods and protect the island.

Historical narratives record that humans occupied Delos at the highest point of the island, Mount Cythnos, during 2500-2000BC and remained through ancient and classical times up to 69BC, when inhabitants abandoned Delos as it was no longer a vital commercial port in the Mediterranean routes. Today, apart from archaeologists safeguarding the island and those undertaking scientific research, Delos is uninhabited. Its ruins stand devoid of human presence.

In this installation, including four specially commissioned new works, Antony Gormley repopulates the island with 29 life-size iron ‘bodyforms’ made during the last 20 years. Restoring a human presence and creating a physical path connecting to the mythology and human activity of Delos’s past, he invites us to use its remains as a site for imagining a human future. Gormley’s approach evokes a radical reassessment of the traditional statue or totem of the pre-modern world that once adorned public squares, temples and private dwellings but which are now absent, sequestered instead inside museums.

Since the early 1980s, Gormley’s sculptures, installations and public artworks have challenged our perception of space and the human body. At the University of Cambridge, he studied Archaeology, Anthropology and Art History, equipping him with a deep understanding of the diversity of human nature and its origins. To connect the geological environment of Delos with its human history of myths, politics, commerce and ritual, the sculptures are installed at various locations throughout the island.

The first connection between visitors and the work is established before they even set foot on Delos. The human presence on the island can be sensed and seen from the boat: approaching the rugged north-west coast, passengers will catch sight of a lone figure (from Gormley’s 1998 series Another Time), standing sentinel in the sea at the edge of the island. Two more sculptures stand at the edge of the commercial port and on Mount Cythnos.

Further ‘bodyforms’ are positioned in the stadium and the theatre district, at the merchant stores and the museum, each in dialogue with the specifics of its location. Gormley is fascinated by the relationship between natural and built form: rock formations sculpted by time and the elements, and others made by the human hand. Through his sculptural placements, he puts this dialectic between nature and culture – sacred built enclosures and the open horizon – to work. The language of his sculpture moves from naturalistic to abstract, evoking a conversation between open and closed forms also found in the sacred and profane architecture on the island. The works stand or lie on the ground, exposed to the elements; their stillness and silence inviting reflection on human life, past and future. Taking his cue from the island’s own onamatological birth as a place of myth and reality, the relation between the visible and the invisible is evoked as the works appear and disappear.

Gormley proposes a radical openness: ‘Art is about reasserting our first-hand experience in present time.’ He sees the installation as a form of acupuncture, a way of catalysing what is already there, allowing it to be reflexive and present in the viewer’s experience. This interaction can lead to an intense physical and mental connection with time, space and nature.

Gormley’s figures on the Island of Delos reminds us how central art is to the human story.