Sean Kelly Gallery is delighted to announce a major exhibition of new photographs by German artist Frank Thiel. The opening of the exhibition will take place on Friday, March 12th from 6pm until 9pm. The artist will be present. The exhibition will continue through Saturday, April 17th, 2004.
Frank Thiel's exhibition is comprised of thirteen large-scale color photographs, the subject of which is the ongoing reconstruction of Berlin. These works pay particular attention to specific architectural details and structures and as a result are more highly abstracted than his previous work. For example, Thiel has extensively photographed rebar substructures for flooring before the concrete is poured over it. These rebar grids reference an abstract tradition closely linked to minimalism and have a painterly quality that recalls the work of Agnes Martin, Robert Ryman and Donald Judd. Another group of work "documents" the ceiling revealed in the "Palast der Republik," the former seat of the East German Parliament in Berlin, which was closed shortly after the re-unification because it contained asbestos. This extraordinary building, closed for many years, will most likely be destroyed in the near future due to the inordinate cost of renovation. There is much debate regarding the future of this site, which is symbolically, emotionally and politically very loaded.

Whilst he has photographed Berlin for over ten years, Thiel's monumental works are not mere documentation, but picture a city reborn after a tumultuous history. Thiel refers to Berlin as "suffering from an overdose of history... Yet it does not suffer from its sediments like other European cities, but from the ongoing consequences of its eruptions." The architectural space in these photographs not only reflects a turbulent social and political history, but comments upon the emergence of new patterns of urban existence. 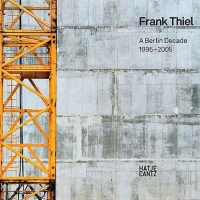