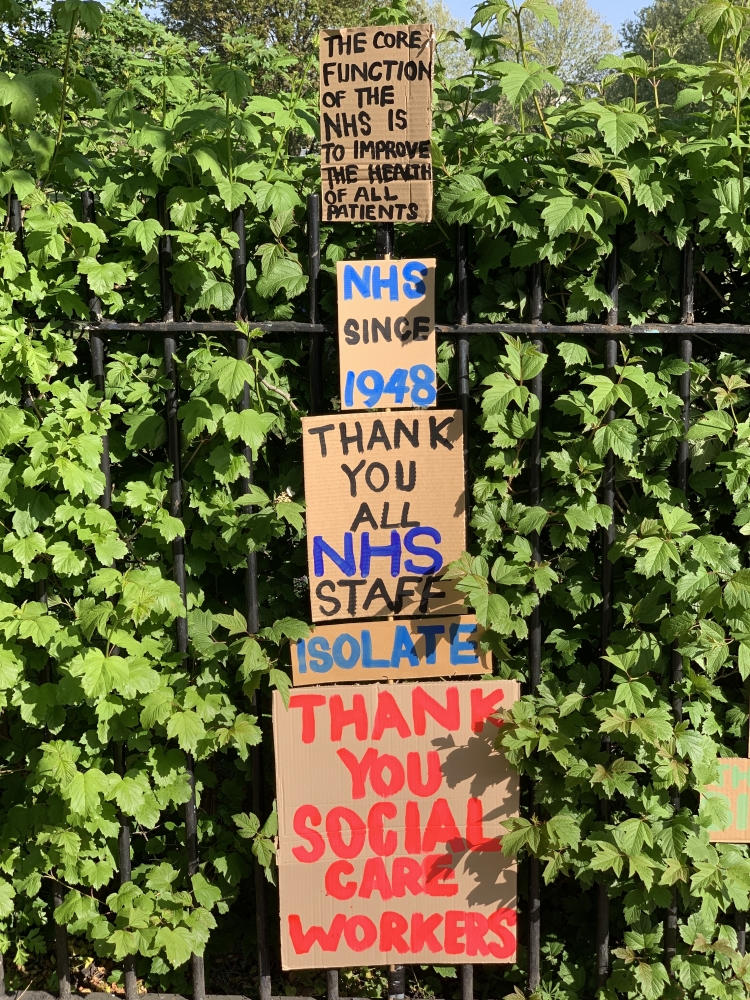 Beginning the evening of April 9, 2020, Peter Liversidge started posting a series of his hand painted signs at the entrance to a London park, which honor health care workers fighting COVID-19 and raise awareness around safe practices. For this #IntheStudio, Liversidge explains the genesis of this work and shares an instructional film showing how he creates them to encourage viewers to create their own.

Sign paintings for the NHS (National Health Service) captivated audiences in London and has captured the attention of individuals internationally. By posting simple statements such as “Stay Safe Isolate,” “Thank you NHS,” “Thank you Home Care Staff,” and “Think of Others,” Liversidge acts as a public advocate, sharing support and sentiments that millions share, but might not have the public forum in which to do so. Liversidge explains, “The signs themselves really come from contemporary events and they reflect what is happening on a daily basis and because they’re painted each day, if the news changes or if things shift, then they also can reflect that, they can change and shift. So every night I’ll go out after dark and I’ll install new signs. I’ll install new signs that may say something positive, but equally the signs might point out things that aren’t particularly working well at the moment.”

Sign paintings for the NHS, 2020, is related to a series of works entitled Notes on Protesting in which Liversidge invited school age children to collaborate with him to create protest banners, placards and songs. Text has always been central to Liversidge’s practice. Indeed, much of his work begins with the creation of proposals—typed on pieces of A4 paper—for performances and artworks in a wide range of media. These proposals are then often realized as objects, performances, happenings or simple interventions. Liversidge experiments with the idea of what is possible, as an individual and within a group, and believes that his work is universally accessible, that in fact, it requires the presence of the viewer and their unique interpretation of the proposal to complete the aesthetic experience. The artist’s active engagement with each space and the community for which he creates is at the center of his varied and dynamic practice.