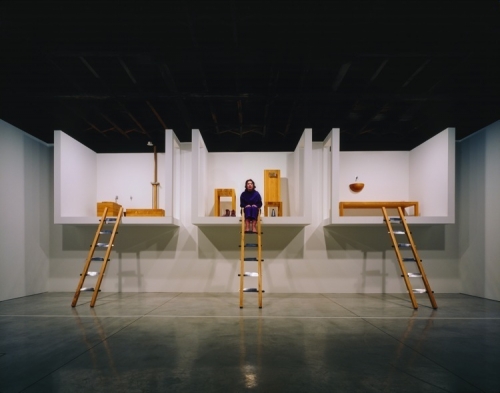 #IntheArchive we look back at Marina Abramović's historic performance, The House with the Ocean View. For twelve days in November 2002, Abramović lived on three separate elevated platforms at Sean Kelly Gallery.

During this time, she did not eat or speak, nor did she have any privacy: the three minimally furnished "rooms" bathroom, sitting room and bedroom she occupied were open, allowing visitors to observe her every movement during normal gallery hours. Against each platform were three ladders with rungs made of large knives, their blades turned upward, which prevented her from leaving the platforms over the course of the performance. This revolutionary exhibition demonstrated #MarinaAbramović’s concern with creating works that ritualize the simple actions of everyday life such as lying, sitting, dreaming and thinking, resulting in the manifestation of a unique mental state.

Abramović recalled how she conceived the performance: “When I came to New York, it was just after September 11, and I found New York so much changed. I found New York and people living here different, more emotional, more vulnerable, more spiritual. The idea of the work was experiment. If I purify myself without eating for 12 days, any kind of food, just drinking pure water, and being in the present moment, here and now, in the three units on the wall, which represent my house, like bathroom, the living room and sleeping room, where the ladder coming down to the space are made from the knives, so you never can leave. That kind of rigorous way of living and purification would do something to change the environment and to change the attitude of people coming to see me. If they will just come and stay and forget about the time. I have in this period people who came first just for a few minutes and then stay for three hours, four hours, and come next day to stay even longer, without really understanding what’s happening. But there’s something like I almost think that if you are in the present and you are purified that you can create kind of energy field, that you can change on atomic level of the space in a certain way with the public and feel and just be in the present time.”