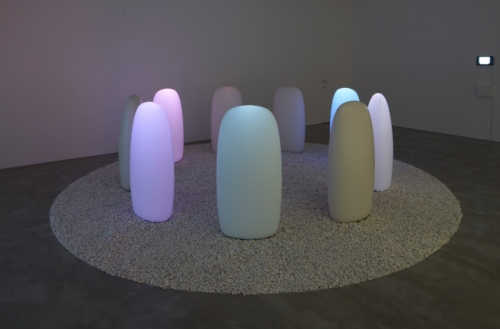 Released in 1968, 2001: A Space Odyssey is a landmark science fiction film dealing with the relationship between humanity and technology, as well as with human evolution. In the film, ape-men evolve into humans capable of using tools when they touch a monolith. Eventually, humanity progresses to the point of venturing into space. In an attempt to solve the riddle of the monolith, humanity embarks on its first manned mission to Jupiter. During the voyage towards Jupiter, HAL 9000, the artificial intelligence that controls the spaceship Discovery One, rises up against the crew. The sequel, 2010: The Year We Make Contact, reveals that the monoliths have a nature similar to cyberspace and function like computer viruses.

One film enabled humanity to travel into the future. This exhibition uses art to revisit questions about what the dream of the HAL 9000 is and what visions of the monolith represent today in 2021, two decades after the movie’s setting of 2001, and to explore modern-day issues of space travel, artificial intelligence uprising, non-human intelligence, and artificial evolution, in the aftermath of the sudden rise of the cyber culture of the 1980s and 1990s. The show attempts to gain understanding and ask questions, from the perspective of 2021, about questions like where we came from, what we are, and where are we going. It does this through works like the topological Canned Universe, which encapsulates the cosmos, artwork that is a device that warps the space-time of the prehistoric Jomon period into the cosmic matrix, a corset turned into a mechanism for augmenting the functioning of our organs so that humans can live in space, video artwork in which characters rejected by the market roam the surface of the moon, just like in a Jules Verne science fiction story, art that explores non-human intelligence and life, art that inherently symbolizes that magnetic fields equate to the warping of space and time, and art that presents ontological issues using the concept of the far side of the moon as a metaphor for eternity. In the midst of the collapse of our sense of absolute time and our shifting sense of the value of our existence in the face of the coronavirus pandemic, the show poses questions about the view we have of the future today, in the Anthropocene, from the vantage point of the view of space of Stanley Kubrick’s 2001: A Space Odyssey, through the participation of nine artists, from master artist Anish Kapoor, who is active throughout the world and continually creating new works, to James Bridle, the prophet of the new dark age.