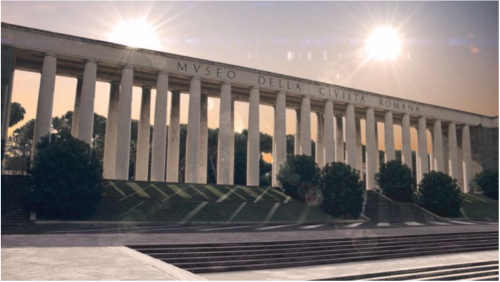 Laurent Grasso’s film Soleil Double, 2014 is today's pick for #FilmFridays. The film will be live for 24 hours from 9am Friday, April 10 until 9am Saturday, April 11 EST. Join us on social media and tag @SeanKellyNY and #SoleilDouble to share a pic of your at-home screening. The person who submits the best picture of them watching the film will receive a signed copy of Laurent Grasso’s catalogue.

#LaurentGrasso filmed Soleil Double in EUR (Esposizione Universale Roma), a city district of Rome originally developed in the 1930s. EUR was envisioned to be an important complex of the 1942 World’s Fair and was intended as an homage to the 20th anniversary of Fascism. However, the World’s Fair never took place due to World War II. Eventually, in the ensuing decades, some of the buildings were completed in their original design while others were added in a more contemporary style – creating an architectural environment that appears to exist in multiple simultaneous timeframes. The two suns shining over the plaza in the film suggest that some sort of unusual natural phenomenon is taking place.

The themes addressed in Soleil Double are not just about the proposed phenomena of two suns in axis around the earth but on a more symbolic level, about the concepts of duplicity and ubiquity, the idea that reality could be something other than what it appears to be at first glance, than what we take for granted as “true” and “right”. These shifting perceptions of reality and the investigation of the territory between what is known, and unknown are subjects common throughout Grasso’s oeuvre.