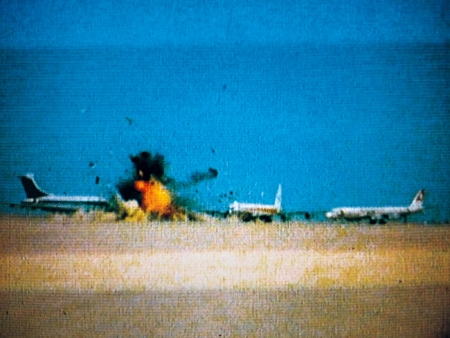 Stars Are Closer and Clouds Are Nutritious Under Golden Trees is a two-part exhibition and public program taking place at the MMAG Foundation between June 13 and December 5, 2019. The project takes Jean Genet's final book, the poetic and self-reflexive Prisoner of Love (1986), as its point of departure. Love for landless revolutions inspired Genet to narrate another kind of story about his time with the Palestinian fedayeen and the Black Panthers during the 1970s.

Reconsidering the vocabularies and incomplete histories of 20th-century political subjectivity, Stars Are Closer and Clouds Are Nutritious Under Golden Trees inhabits different times and spaces, thinking in the languages of the region, including Arabic, English, French, Kurdish and Turkish. The program connects figures of the political left from Turkey who fought in Palestine in the 1970s with Palestinian feminist movements of the British Mandate period. It follows the story of the Portapak camera that recorded Jean Genet in Jordan and then traveled to North America and Africa, feeding into the eroticism of revolutionary desire and power while highlighting the contemporary dilemma of the Kurdish autonomous women's movement in northern Syria. In other fragments of history, the Soviet film archive recently found in Amman walks alongside an accelerated dream that was triggered by the once-iconic political spectacle of the plane hijackings. The fighters of Monique Wittig's Les Guérillères (1969) merge with the Black Panther who found inspiration in the poetry of Palestinian Samih al-Qasim.

These narrative fragments form a political and poetical imaginary that will gradually take over the MMAG Foundation over six months. The two parts of the exhibition, opening on June 13 and September 19 respectively, will be bridged by a public program that includes lectures, conversations, screenings and workshops. The project is a collective effort by artists, activists, archivists and academics to explore the different ways we can counter hegemonic discourses and histories of the context.

Because the world needs other kinds of stories.