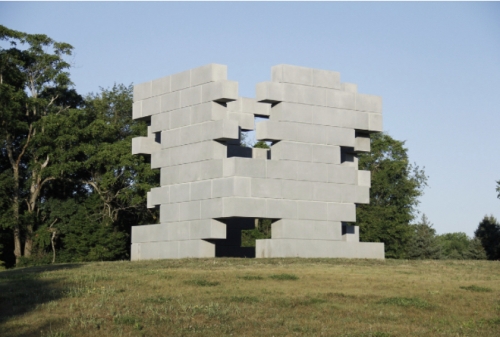 Today we go #IntheArchive with Iran do Espírito Santo’s sculpture Playground, 2013. One of Brazil’s most highly regarded contemporary artists, Iran do Espírito Santo is known for his austere yet sensuous drawings, wall paintings, and sculptures. Do Espírito Santo’s cast concrete sculpture, Playground is an interactive, monumental sculpture that was created in 2013. His first public work in the United States, it was originally installed in Central Park by the Public Art Fund and was then permanently installed in The Fields Sculpture Park at Art Omi in March 2016.

Upon first inspection, the sculpture appears to be a massive cube made from large stone blocks with several blocks missing at the corners. However, upon further examination it becomes evident that the work is not constructed from individual elements, but rather cast in stone-like concrete as a unified form. We see that the “mortar” is exactly the same as the “block” itself and that the entire sculpture is consistent in color, texture, and finish. The “missing” corner elements were never there, but are instead deliberately composed openings that allow transparency and access to the interior space.

Do Espírito Santo speaks of the work as a kind of “idealized ruin” that is also a metaphorical playground. As a child the artist loved to play with building blocks. Given its architectural materials and oversized scale, Playground recalls a blown-up cartoon image of a child’s fantasy building. At the same time, the artist has created a subtle and elegant play between perception and reality, construction and destruction, and idealized form and everyday objects and materials.