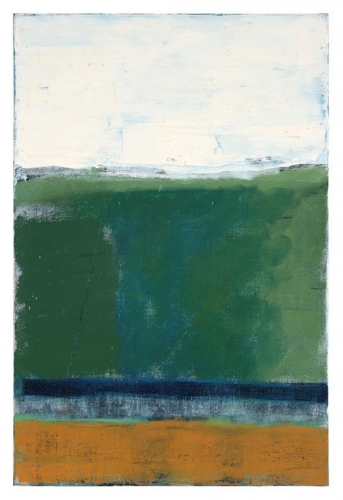 The work of the young Belgian painter Ilse D'Hollander who died recently is being discovered worldwide. D'Hollander is known for its glowing landscapes that are both abstract and figurative. Ilse D'Hollander's work is described as 'frugal, silent and subtle but equally lyrical compositions, balancing between abstraction and evocation of the Flemish countryside'.

What could D'Hollander, who so doubted about her, think of all that attention and those praising words? In recent years her work has been shown in galleries in Antwerp and Museum M in Leuven, then in Düsseldorf, Berlin and New York and now also in Puurs-Sint-Amands. Unfortunately, we can no longer ask her: she left life in 1997, at the age of 28.

D'Hollander was born in Sint-Niklaas in the revolt year of 1968. D'Hollander took classes at the academies of Antwerp and Ghent. Around 1990, she resolutely opted for painting. The last three years of her life she displayed enormous productivity. She made around 500 paintings on canvas and on paper.

In her work on canvas from the period 1995 to early 1997, D'Hollander achieved her highly personal fusion of abstraction and figuration, although occasionally a lonely skeletal tree emerges in a recognizable landscape. In 1994 the artist moved to the Zwalm region. She lived very isolated there, but her frequent walks in nature gave her a lot of inspiration. Back in her studio, she painted the impressions - a kind of 'after-images' - that evoked her walks. D'Hollander was not interested in an accurate representation of the landscape.

On the other hand, D'Hollander must have simply departed from the 'white canvas' in the studio and merely thought in terms of paint, surfaces and volume, in dots and stripes, and in color. In addition, she was inspired by the work of painters as diverse as Paul Cézanne and Raoul de Keyser.

What makes the irresistible power, charm and strength of D'Hollander's oeuvre is in the first place its bold use of color. At the same time she puts her work under tension. By roughly repainting surfaces and allowing them to shine through, by letting paint strokes fan out in all directions or by - at the very end - drawing a slash through a composition that gives the whole dynamic and energy.

D'Hollander found her own voice in a short time. She created a personal world of glowing colors and passionate paint, but she also brushed a dried-up dark path amidst misty blue fields, where the bushes are eternally sunk in melancholy blackness. A virtuoso painter who could only live in her paintings.