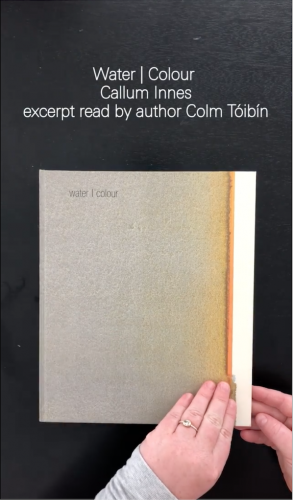 For today’s #IntheArchive, Colm Tóibín reads an excerpt from callum innes|colm tóibín water|colour. A collaborative project between the artist and writer, the publication accompanied an exhibition uniting their two bodies of work, which was exhibited at Sean Kelly December 2010-January 2011.

The publication includes reproductions of 101 watercolours of Innes’s, as well as Tóibín’s text, which tells the story of Nora, a middle-aged housewife struggling with the recent death of her husband and its effect on her family. Tóibín elegantly weaves a poignant tale of loss, depression and, ultimately, the promise of healing, placed against the backdrop of the unique colors of the Irish shoreline.

The gallery introduced @innes_callum and Colm Tóibín in February 2010. A long-time admirer of Innes’s work, Tóibín spoke at length with Innes about the artist’s watercolours during their initial meeting. They subsequently continued their conversation at Innes’s studio in Edinburgh later that summer and as their creative connections became apparent and their friendship grew, the gallery asked Tóibín to write an essay in response to Innes’s works on paper. That request led to Tóibín’s powerful short story water|colour; after reading Tóibín’s text, Innes created the new body of watercolours included in the exhibition based on that story.