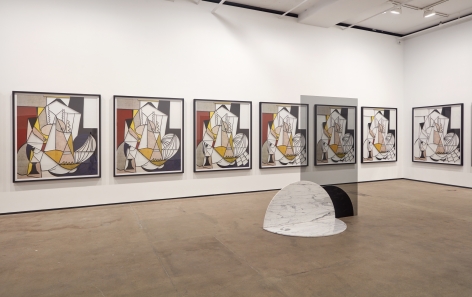 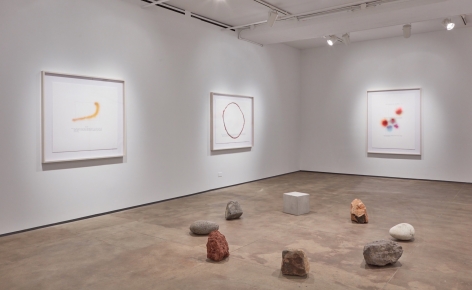 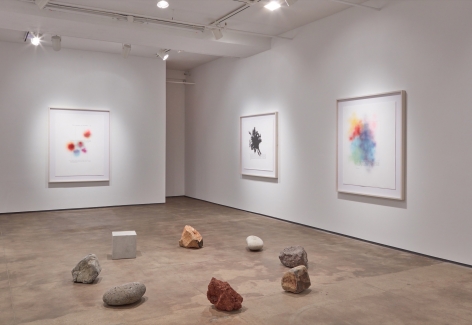 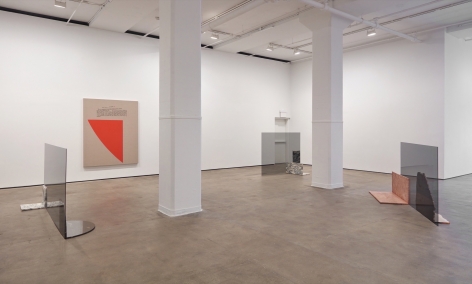 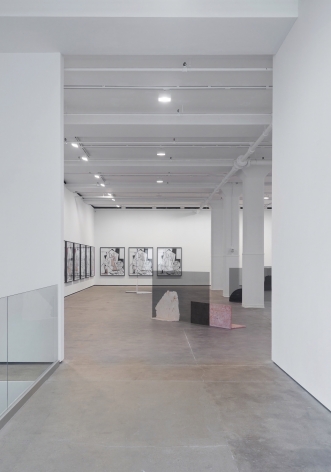 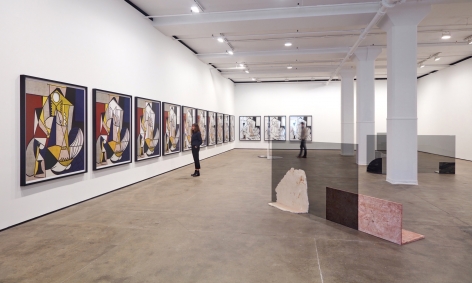 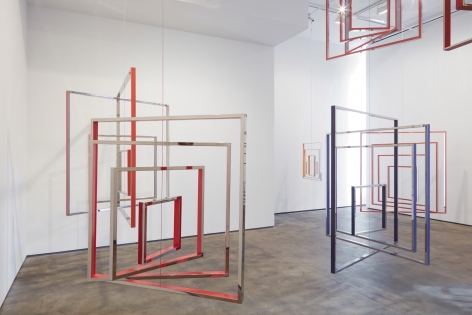 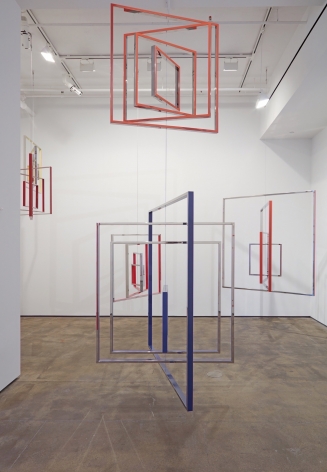 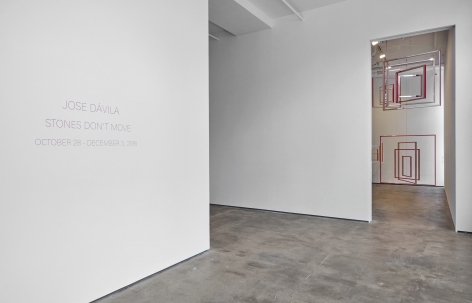 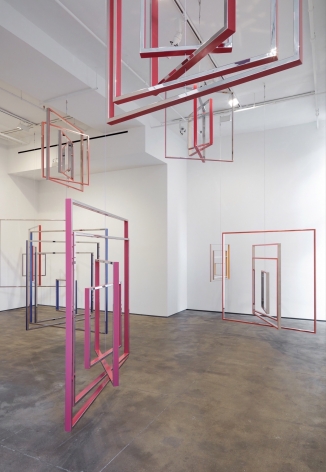 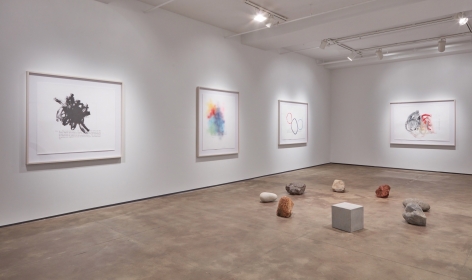 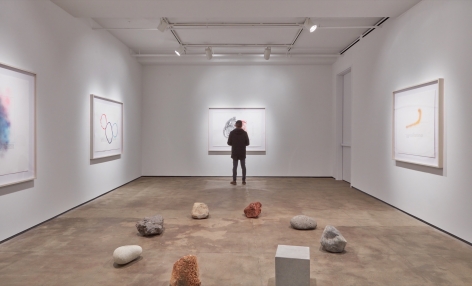 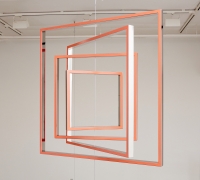 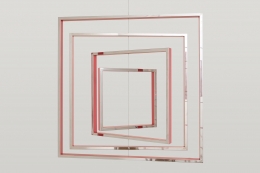 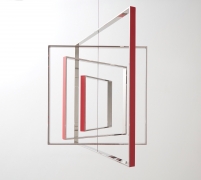 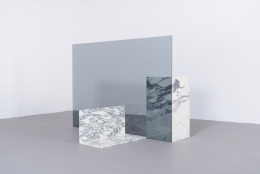 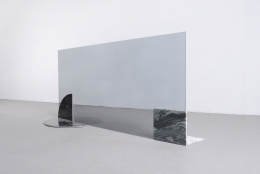 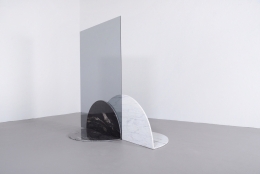 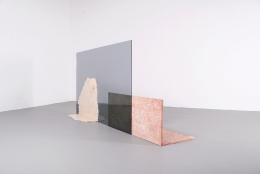 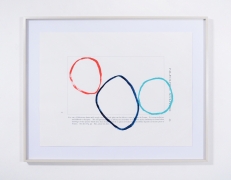 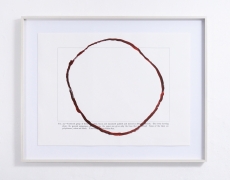 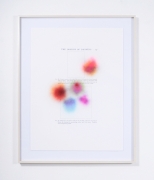 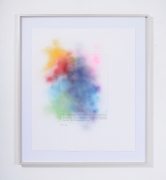 Sean Kelly is delighted to announce Stones Don’t Move, a one-person exhibition of new work by Jose Dávila. This will be Dávila’s second exhibition with the gallery. An opening reception will take place on Thursday, October 27, from 6-8pm, the artist will be present.

In Stones Don’t Move, Dávila will occupy each of the gallery’s three exhibition spaces with a powerful presentation of his signature photographic cutouts, sculptures, and paintings. Expanding upon his career-long investigation into how the modernist movement continues to be interpreted, appropriated, and reinvented, the work on view will address the tenets of architecture, art history, and physical geometry, whilst demonstrating the extensive range of Dávila’s practice.

In the front gallery, a selection of mobiles in various colors and sizes will be suspended from the ceiling at different heights, creating an immersive kinetic installation. The works, part of Dávila’s ongoing series entitled Homage to the Square, are examples of his longstanding fascination with Josef Albers' renowned theories on the perception and interaction of color through a mathematically determined format of squares. In them, Dávila advances Albers inquiry by establishing the square as a three-dimensional object, existing in a dynamic state of motion.

In the main gallery, Dávila will present a series of large-scale photographic cut-outs based on Roy Lichtenstein’s Femme d'Alger, 1963, which was inspired by Pablo Picasso’s The Women of Algiers, 1955, which in turn was inspired by Eugène Delacroix's 1834 painting The Women of Algiers in their Apartment. Reminiscent of the Picasso series, which included fifteen oil paintings and several hundred sketches, Davila’s cut-outs are presented in thirteen variations. Beginning with a complete image, key elements of the image are progressively removed until the work is reduced to its essential structural elements, inviting the viewer to pause and consider the importance of both what is no longer present and what remains.

A number of new freestanding glass and marble floor sculptures complete the installation in the main gallery. The sculptures expand upon Joint Effort – Dávila’s ongoing series of gravity defying works utilizing readily available building materials. Juxtaposing these materials in a literal and metaphorical moment of tension, the works create a powerful interplay of fragility and strength, balance and equilibrium.

A series of works on paper, entitled A Copy Is a Meta-Original, will be on view in the downstairs gallery. Dismantling any logical relationship between form and content, Dávila superimposes playful childlike marks – evoking the physicality and poetry of an artist such as Cy Twombly – over taxonomical frameworks from various academic textbooks. In the center of the space a sculpture comprised of found stones evinces a sense of the fundamental building blocks of Dávila’s work. Utilizing the horizontal plane, the piece foregrounds Dávila’s entire sculptural oeuvre and acknowledges the minimalist notion of “sculpture as place," as conceived of by artists such as Carl Andre and Richard Long.

Dávila’s work is in the permanent collection of numerous institutions including: the Museum Voorlinden, Wassenaar, Netherlands; the Centre Georges Pompidou, París, France; the Thyssen-Bornemisza Art Contemporary, Vienna, Austria; the Pérez Art Museum, Miami, Florida; the Museo Universitario Arte Contemporáneo (MUAC), Mexico City, Mexico; the Museo Nacional Centro de Arte Reina Sofía, Madrid, Spain; Inhotim, Brumadinho, Brazil; the Albright–Knox Art Gallery, Buffalo, New York; the Zabludowicz Collection, London, Great Britain; and the Museum of Modern Art, Luxembourg. Dávila has been the recipient of support from the Andy Warhol Foundation, a residency at Kunstwerke in Berlin and at the Ecole cantonal d’art du Valais in Switzerland, the National Grant for young artists by the Mexican Arts Council (FONCA) and was the winner of the 2014 EFG ArtNexus Latin America Art Award. Most recently, the Getty Foundation awarded the Los Angeles Nomadic Division a grant for Dávila to create a major public installation as part of the Getty’s Pacific Standard Time: LA/LA initiative, which is planned for fall 2017. 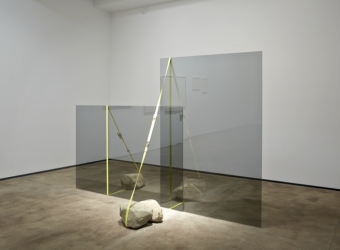 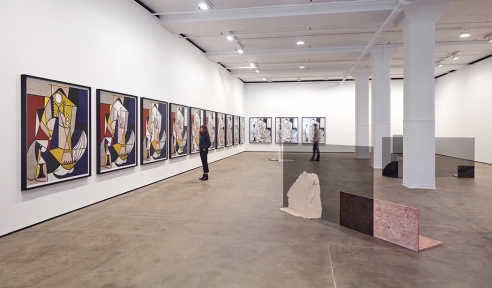 Neither Land Nor Sea: A Q&A with Jose Dávila
Blouin Artinfo, November 8, 2016 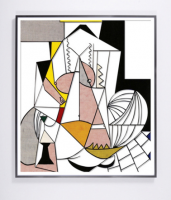