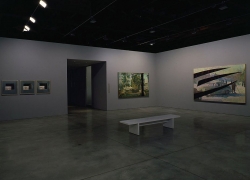 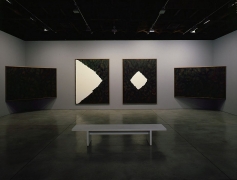 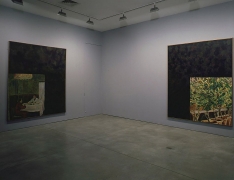 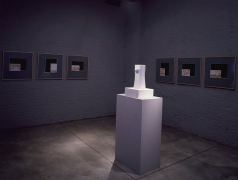 Sean Kelly Gallery is delighted to announce a major installation by Ilya & Emilia Kabakov presenting paintings by Ilya Kabakov. This is the first ever New York gallery exhibition of Kabakov's renowned paintings.

The exhibition introduces the fictional painter Ilya Kabakov, a creation of the actual Ilya Kabakov's imagination. These paintings allude to a poignant, sweeping alternative history of Russian art and culture in the 20th century. On view are paintings from a single five-year period of the artist's invented oeuvre, between 1970 and 1975. Scenes of factories, parks and peasant girls are juxtaposed and overpowered by black forms of geometrical abstraction. The oil paintings represent a merging of homegrown Soviet Realism and modernist abstraction. The dark, gloomy backgrounds of the paintings psychologically reflect upon the prevailing social concerns affecting artists of Kabakov's generation in the USSR at that time. Through this body of work, Kabakov questions the future of the modernist paradigm and confronts art historical and museological methods: the nature of the museum retrospective and the epoch of the avant-garde.

Designated one of the world's 10 greatest living artists by ARTnews, Ilya Kabakov has been making major installations and paintings for more than three decades, becoming not only one of the medium's most important practitioners but also one of its most significant theoreticians and the leading figure of the Russian art movement of the 1980s known as "Moscow Conceptualism." Kabakov was born in USSR in 1933 and lived in Moscow until coming to the West in 1988. Officially defined an illustrator of children's books during this period, he was in fact one of the leaders of Moscow's unofficial underground art scene from the late 1950s on, and is widely recognized as one of the most important artists of our time.