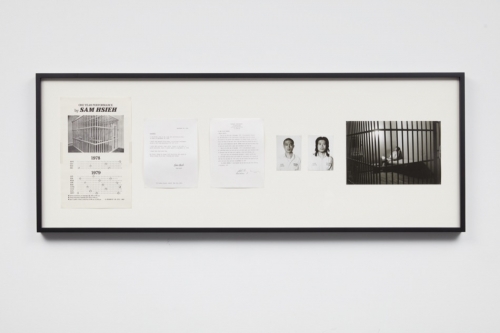 Confinement: Politics of Space and Bodies is a direct response to Samuel Beckett’s play Happy Days (1961), which sees a woman buried up to her neck in the ground. Under the blazing sun, Winnie is anchored in a mound of sand, her belongings gathered in a black bag. She treasures these items just as much as she does the daily routine of taking her possessions in and out of the pouch. A tribute to Winnie, this group exhibition highlights the ambiguities of a notion that evokes both the protection of the cocoon and the constriction of the enclosed place.

At a time when expanded rights and increased liberties of movement should be prevalent, a new regime of thought and mobility now belies our long negotiated liberties. This group of artists approach the idea of confinement as it unfolds in both physical and mental spaces. Each artist grapples with the joint ability for art spaces—museums and studios alike—to act as either safe places or as structures of compliance.

Presented together, these works prompt us to reflect on critic Litia Perta’s question: “… what kind of compliance is available for brown bodies, queer bodies, ill bodies, riotous, irreverent, gender-non-compliant bodies, poor bodies, trans bodies, feminist anti-capitalist bodies?” While this question remains unanswered, Confinement invites a continued consideration of how bodies are affected by voluntary and involuntary systems of confinement.